Our team of research, data and psychology specialists will help you understand your data needs and provide bespoke insight and solutions.

RepGraph provides statistical analysis and interpretation of research data. This may be research carried out by RepGraph, commissioned by ourselves on your behalf or data gathered by your organisation. We also conduct data cleansing exercises on a bespoke basis. RepGraph develops domain knowledge through research and communication with our clients. This not only assists with data validation but also guarantees that outputs such as online reports and presentations have the right context and are relevant to the target audience.

In the early 1970s, Amos Tversky and Daniel Kahneman introduced the term ‘cognitive bias’ to describe people’s systematic but purportedly flawed patterns of responses to judgment and decision problems. Cognitive biases are just tools, useful in the right contexts, harmful in others. They biases influence how we think about and interpret data and can sometimes lead to errors in judgement and flawed or subjective decision-making. 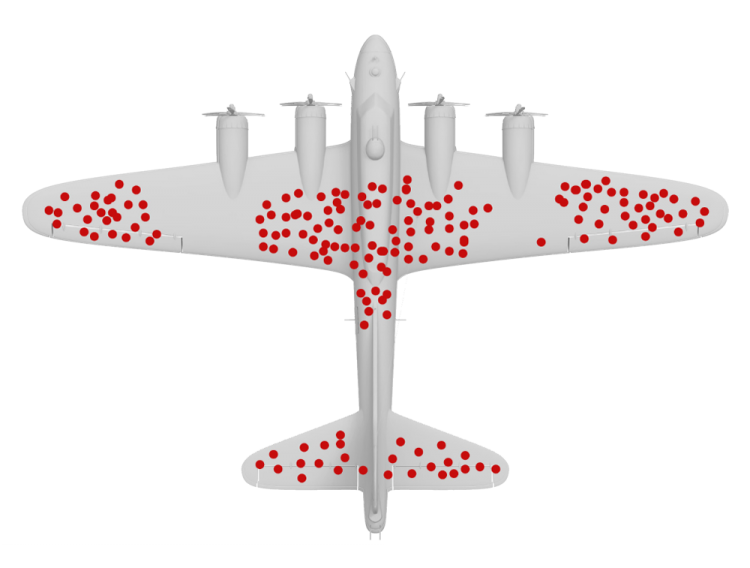 During World War II, some bomber aircraft were shot down over Germany whilst others would return with bullet holes and severe damage. Allied researchers mapped the areas that were most commonly hit by enemy fire and the data showed a clear pattern. In the image you can see that most damage is to the wings and body of the plane but not the cockpit, engine, and parts of the tail. The analysts concluded that the damaged areas needed to be strengthened.

The American military asked mathematician Abraham Wald to study how best to protect aircraft from being shot down. Wald pointed out that the data had a critical flaw – it did not include those bombers that did not return. What the researchers had created was a map of the areas that the bomber could be shot and still survive. This insight led to the armour being reinforced on the parts of the plane where there were no bullet holes.

Human insight is key – while amassing data is critical, missing data may be more important to solving a problem than the data you have in front of you.
This logical error is known as ‘survivorship bias’ when we assume that success tells the whole story and when we don’t adequately account for failure.

HOW WE DO IT

Identify and plan the best approach for your business

Provide outcomes in a clear, digestible and most of all practical format

We use an iterative methodology in project planning and undertake small scale proof of concept exercises to inform project decision making and assist in refining requirements.

Data cannot be properly analysed unless it is as clean and accurate as possible. Analysis of uncleansed data can lead to inaccurate results, incorrect interpretation and even false outcomes.

RepGraph uses a combination of techniques to cleanse and organise data including grouping and deduplication, natural language processing, automated validation and cleansing metrics.

RepGraph has developed a wide variety of surveys and questionnaires as stand-alone projects or as part of large research exercises including:

RepGraph provides statistical analysis and interpretation of research data. This may be research carried out by RepGraph, commissioned by ourselves on your behalf or data gathered by your organisation. We also conduct data cleansing exercises on a bespoke basis. We often work with large and medium sized, complex datasets that are difficult to process using traditional applications and techniques. We employ data mining methods to explore Big Data in search of patterns and/or systematic relationships between variables, and also to validate findings by applying the detected patterns to new subsets of data.

RepGraph has a long and proven track record in producing reports and analytical outputs for our clients. We provide accessible narrative and focus on clear graphical representations because we believe that one glance should tell you all you need to know. In addition to standard hardcopy documents, we create rich, dynamic online reports. Data can be explored and customised by the user through interactive and animated charts.
Scroll to Top